Small things worth seeing and then seeing again.

Watching Bowie’s last video Lazarus over and over again. 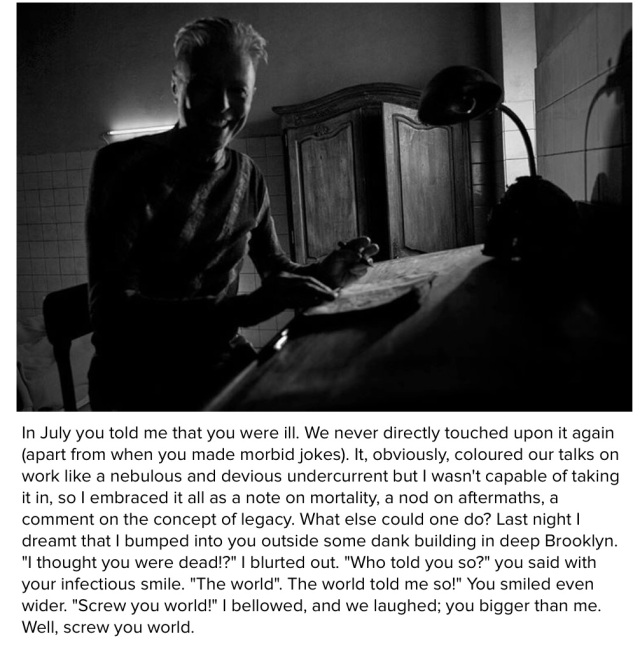 from Johan Renck, the Swedish director at the helm of Bowie’s stunning visuals in “Lazarus” and “Backstair”……..

One of my favorite writers, Rebecca Solnit, wrote the following in her book, Hope In The Dark:  “Virginia Woolf wrote in her journal, ‘The future is dark, which is on the whole, the best thing the future can be, I think.’ Dark, she seems to say, as in inscrutable, not as in terrible. We often mistake the one for the other. People imagine the end of the world is nigh because the future is unimaginable. … We talk about “what we hope for” in terms of what we hope will come to pass but we could think of it another way, as why we hope. We hope on principle, we hope tactically and strategically, we hope because the future is dark, we hope because it’s a more powerful and more joyful way to live.”

Some small thing are actually a testament to that hope.

“It's not a big thing, but I guess it's true--big things are often just small things that are noticed.” ― Markus Zusak, I Am the Messenger
View all posts by lannewise →
This entry was posted in Uncategorized and tagged David Bowie, Johan Renck, Lanne Wise, Lazarus, Rebecca Solnit, Robin Sojourner, secondlife. Bookmark the permalink.